I’m slammin’ busy, so here’s another old post.  It’s long and full of poop, like most of my days.


Should I tell the tale of the video store?  Okay.

I
took all the kids, by myself, to the video store on Friday. John wasn’t
going to be home until late and I thought I’d grab a movie that he
wouldn’t be interested in. We got to the place we always go to, and
Sophie was asleep. Luckily, I had an umbrella stroller in the car, so
that Sophie could ride in it during her nap with her chin plonked down
on her collarbone and drool running out of her mouth. She was really
really tired. Umbrella strollers don’t recline. Poor girl. Anyway, I
told the kids that since I was taking them to the video store even
though their sister was sleeping, I’d carry Willow and they had to be
in charge of Sophie. So far, so good. We make it inside without
incident, and we even pick our movies pretty quickly. I saw a used
pokemon video for 1.99 and grabbed that as well. Great. All set. Except
. . . Nate has to poop. Now. I ask the kid behind the counter if we can
run use the bathroom and he said no. I said it was for my four year old
who really couldn’t wait. He said no again. I asked when they changed
the policy, since we’d used the bathroom lots of times before. He just
said we’d have to go to the restaurant across the parking lot. I kept
staring at him. I asked if he was really sure about this. He said he
was. We put back our movies. We headed across the parking lot. Now, I
wasn’t planning ahead, and was carrying Willow in my arms instead of
one of the two slings or the cloth frontpack in the van. I also had my
wallet in my hand.

(I need a paragraph break.)

So, we
go to the cafe. Nate poops while I say obsessively, "Don’t touch
anything! Don’t touch the toilet seat! Wash your hands!" We are all
happy he made it. I feel like we should at least order drinks or
something, so we get a couple of sprites and a coke and Lexy says he’s
hungry. He says to the man, "I know this may sound sort of unusual, but
I’d like a burrito with just rice. Is it spanish rice? Great. I’d like
a burrito, just stuffed with that rice, please. Thanks." The guy is
cracking up, gets our drinks and burrito and rings us up. (Isn’t it sad
that I put that on my visa? I never have cash. It’s pathetic.) Problems
arise as we begin to go back to the van to stash our stuff before going
back to the video store for our movies. Lexy is utterly incapable of
carrying things. His burrito was in a little paper sack, and his drink
was pretty big, but not unwieldy. He could not carry both. No way. So,
I left him with Sophie in front of the restaurant, took Nate and the
drinks and the burrito in a sack and my wallet, and, oh yeah, don’t
forget Willow, and walked across the parking lot to the van. We put
everything inside. We go back across the parking lot, get Lexy and
Sophie, go back to the video store and pick up where we left off.

We
are now in line with lots of crappy movies and it’s really hot outside
and I’m tired and ready to pay and get home. A different clerk rings us
up. Midway through the transaction, Lexy starts hopping around with his
hand over his hiney, saying, "Mmmmmmoooooooooommm! I hafta go poop!"
No, I’m not kidding. I just looked at him and asked if he could make it
home. I seriously was afraid he was going to go on their floor, because
he kept looking at the ground like he’d dropped something. The video
guy says, "Oh, he can use our bathroom. I’ll show him where it is."

I still don’t know if that made me really happy or supremely pissed off.  Who can tell?

I
pay, and take the other three kids to the front of the store. We wait
for Lexy. Nate decides that only big kids get to use the bathroom there
and decides that is very unfair. I tried to explain to him about Store
Rules and how nice people let children use the toilet when they need to
and that people who are less than nice tell them to go across the
street, but he was not convinced. Lexy was gone awhile, and little
alarms started going off in my head. So, I left Nate with Sophie, still
asleep, thank heaven, and went to see if Lexy was okay. He met me
halfway, and I couldn’t help it, I asked if the guy had gone into the
bathroom with him to help him. No, he hadn’t, Lexy said, it just took a
long time and we needed to hurry home because he was only halfway done.
I thought, "Do I truly want to know what that means?" as I asked him if
he was okay. He said yes and we got to the car, where Sophie woke up,
saw she didn’t have a Sprite, and threw a HUGE FIT for ICE.

I was so glad to get home.

Of
course, I fell asleep and didn’t get to see the movie until the
following night, which was okay since John liked it too. About Schmidt,
in case you were wondering. If you can stand it, I do have another
rambling story to tell.

On Monday it was hot. John and I dropped
the kids off at their dad’s at 6 pm and went to Trader Joe’s for
groceries. Standing near the entrance was a very young (twentiesish)
girl in a halter top that showed her flat and tan stomach (how do you
get both those things, should be one or the other, shouldn’t
it?) and a short skirt with a low waistline. Hmmmm. I was already
feeling supremely ugly because, now this may shock you, sometimes
Willow is really fussy and I don’t get a shower. This was one of those
days. I had that lovely limp gross sweaty hair in a ponytail look going
on, and my frumpy fat skirt from Target and a dorky nursing shirt and
no make up (not unusual, but also not helping me that day). We
made it past her, and went inside. There were like a hundred and sixty
eight girls just like her, I swear. And they were all tall and really
pretty. They had lettuce and bottled water in their carts and I was
piling in the cookies and chocolate, because, you know, at this point,
Who cares?? I said to John that I was a little pissy that there were so
many gorgeous women there when I was feeling like dirt. He hugged me
and said something wonderful, because he is the greatest man alive, by
far. In line one of them was right behind us and she said, "Oh, your
baby is so cute." I wanted to crawl under the cash register cabinet. It
was awful.

We got home and unloaded the groceries. We live in
a duplex and have new neighbors. I had only met the husband, but knew
there was a wife and a four month old baby, Sophie. The wife was
outside tearing up all the ferns that the people who lived there for
the past fourteen or so years had planted and watered all the time and
maybe even obsessed over a bit (hope they don’t come back to visit;
they’ll just cry).

She is tall. She is totally beautiful. She
could be a Gap model. She is way too thin to have a baby so young. She
was doing yardwork. Our lawn looks terrible. It’s weedy and brown and
overgrown. The wildflowers I had under the mailbox are dead, but by
Golly they’re still standing, so that looks extra attractive.
Her baby was in one of those baby bucket car seat things and was
quietly playing with toys and watching her. I would have slinked
inside, but she waved and smiled with her perfect teeth. I had to go
over. I also was coated in Willow barf. That child has become a little
cheese factory. But, the new neighbor is really nice and I’m glad to
have her there. I think we’ll get along and the kids can hang out if
they stay long enough for that to happen. Gosh, did I just jinx
everything? Will we have some horrid dispute with them now and start
trying to get each other evicted? I’m sure as long as she drinks coffee
and likes to talk we’ll get along fine.

So, today. Today a good
thing happened and that was my hair. I put it up and it did this cute
little thing all by itself and I got actual compliments. I even wore
lipstick. And sort of matching undergarments. I felt pretty good. I
picked up my little man from his last day of Kindergarten, which
reminds me: 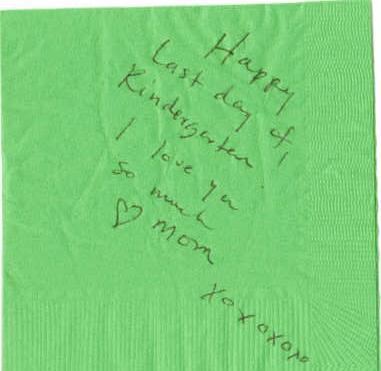 I love having a place to keep things like this.

The
end of school was pretty sad. I was very grown-up and didn’t cry when I
walked up to the class and heard the kids singing. I could hear
children singing about sand fleas or something and I would cry. It’s
just those sweet little voices that get me. But, I’m so proud, I didn’t
let myself start, because maybe I wouldn’t be able to stop right away
and Lexy would be mortified. His teacher sang the same song that she
sang at the end of every day. It goes, "Now the day is over, now the
day is through, Goodbye, Goodbye, Goodbye from me to you." She then
adds, for example, "Goodbye Lara, Goodbye Paul, Goodbye Lexy, I love to
see you smile." And even though she was teary, she did the whole thing.
It was really sweet. She was very glad to be done with this year. It
was challenging. We plan to meet for drinks this summer.